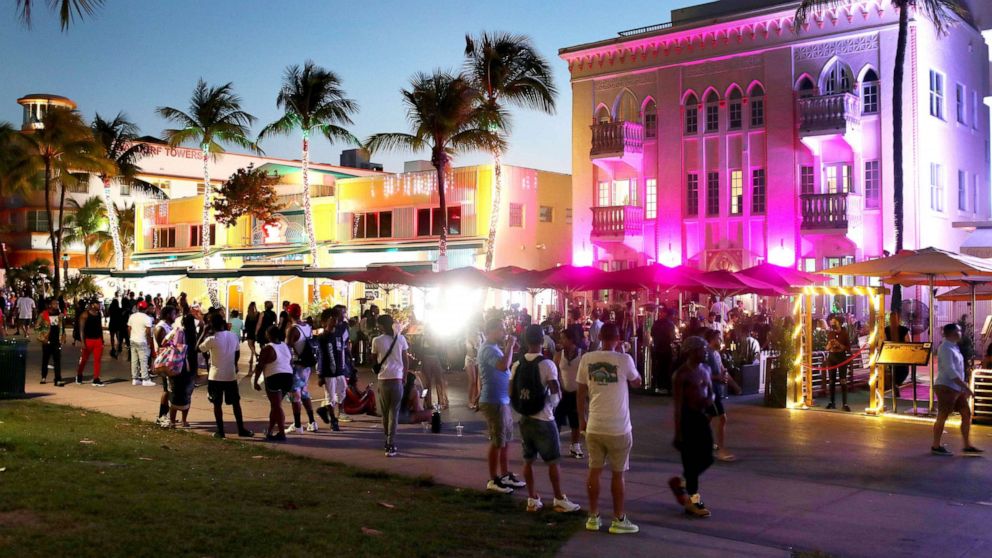 The city has instituted an 8 pm. curfew to curb partying.

Miami Beach officials have declared a state of emergency due to “overwhelming” spring break crowds, imposing an 8 pm curfew this weekend for its entertainment district and temporarily closing several roads leading into the city.

“At the end of the day, all the policing in the world isn’t going to stop something terrible from happening if it’s going to happen,” Gelber said during a press briefing Saturday. “Our city right now in this area has become a tinder, and we cannot have a policy of simply hoping that it’s not lit.”

The new emergency orders will be in effect for up to 72 hours, officials said.

The 8 pm curfew starts Saturday. A countywide curfew had already been in place from midnight to 6 am due to the coronavirus pandemic.

Eastbound traffic on three causeways will also be closed to traffic, with some exceptions for residents and hotel guests, from 9 pm to 6 am Main thoroughfare Ocean Drive will also close to vehicular and pedestrian traffic starting at 8 pm, save for residents, hotel guests and business employees.

“This was not an easy decision to make,” interim City Manager Raul Aguila told reporters at the briefing. “We are doing that to protect the public health and safety.”

Friday night along Ocean Drive in particular was “quite simply overwhelming,” he said.

The mayor said this season’s spring break has attracted more visitors than in previous years, as access to other destinations may be limited due to COVID-19 restrictions.

“People tend to come to the place that is open,” Gelber said.

At least twice in the past week, Miami Beach police officers resorted to using pepper balls to disperse crowds near Ocean Drive. Two police officers were injured last weekend while taking a suspect into custody, the department said.

“We’ve done everything we can to try and mitigate the behavior that we are seeing, but quite frankly, I am concerned that the behavior is getting to be a little bit more for us to be able to handle,” Miami Beach Police Chief Rick Clements said during the briefing.

Clements said there was one incident Thursday night in which property was destroyed as hundreds of people dispersed. On Friday night there were three such incidents, resulting in injuries, he said.

Some businesses have opted to close during the spring break season. On Friday, the Clevelander in South Beach, a famous city hotspot, announced it will cease its food and beverage operations through at least Wednesday.

“Recently, we have grown increasingly concerned with the safety of our dedicated employees and valued customers and the ability of the City to maintain a safe environment in the surrounding area,” the management team said in an Instagram post.

How To Take Back The GOP