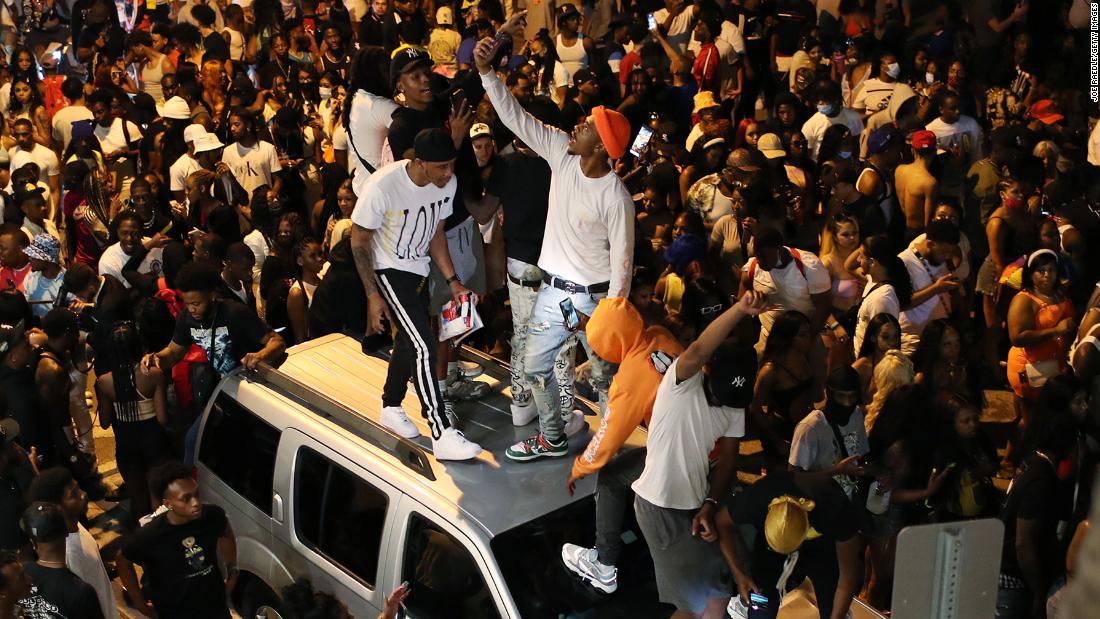 Now the director of the Centers for Disease Control and Prevention said she’s afraid of what will happen next.

“What we’ve seen over the last week or so is a steady rise of cases,” said CDC Director Dr. Rochelle Walensky on Monday.

“I know that travel is up, and I just worry that we will see the surges that we saw over the summer and over the winter again.”

And the combination of young, carefree revelers and states ditching safety mandates has helped send the country backward, said Dr. Anthony Fauci, director of the National Institute of Allergy and Infectious Diseases.

“What we’re likely seeing is because of things like spring break and pulling back on the mitigation methods that you’ve seen now,” Fauci told CBS’ “Face the Nation” on Sunday.

The great news is all three vaccines being distributed in the US appear to work well against the B.1.1.7 strain. But with only 15.8% of the US population fully vaccinated – and anti-vaxxers and vaccine hesitancy preventing America from returning to normal faster – it’s time for a reality check.

“Now is one of those times when I have to share the truth, and I have to hope and trust you will listen,” Walensky said.

“I’m going to reflect on the recurring feeling I have of impending doom … We have so much to look forward to, so much promise and potential of where we are and so much reason for hope. But right now, I’ m scared.”

Before she became CDC director, Walensky was on the front lines of the pandemic, witnessing some patients die from Covid-19.

“I know what it’s like as a physician to stand in that patient room – gowned, gloved, masked, shielded – and to be the last person to touch someone else’s loved one, because they are not able to be there,” she said.

The US has come “such a long way,” Walensky said, pleading with all Americans to keep masking up and “hold on a little while longer” as more people get vaccinated.

Young people are fueling much of this new surge

At least 27 states have averaged at least 10% more cases each day this past week compared to the previous week, according to Johns Hopkins University.

“A lot of the spread is happening among younger people,” said Dr. Ashish Jha, dean of the Brown University School of Public Health. “That’s the group that is moving around, kind of relaxing, getting infected.”

Spring break crowds swelled in popular beach destinations, including South Florida, where local leaders said the vacationers were more than they could handle. Air travel has broken pandemic records this month, with millions of Americans boarding planes.
Track Covid-19 cases in your state and nationwide
And some state governors and local officials recently relaxed safety mandates, despite warnings from health experts to keep them in place a bit longer.

“We’re weeks away from a point where we can begin to do these things a bit more safely,” Jha said. “But I think states have just moved too fast.”

Khaldun attributed the rise in cases to a number of factors, like more gatherings, more mobility, business reopenings and specific outbreaks in some prisons and schools.

“Recent increases in hospital admissions and test positivity are concerning new developments and we don’t want to go down the same path we’ve seen before and experience a resurgence in the pandemic,” Dr. Ngozi Ezike, director of the Illinois Department of Public Health, said in a statement.

“We cannot move forward if our metrics are going backward.”

“Our efforts to vaccinate Vermonters is a race against what the virus does best: move easily from person to person,” Levine said. “Throughout the country, including up and down the Eastern Seaboard, case numbers are up.”

New Hampshire has recently suffered not just an increase in new cases, but also increasing test positivity rates. And the number of infections is increasing among young people, especially in teenagers and young adults, officials said.

But there’s great news on the vaccine front: The CDC says the Pfizer/BioNTech and Moderna vaccines offer strong protection – not just against illness, but also against infection.

Both vaccines require two doses. After full vaccination, both vaccines were 90% effective at preventing infections, including infections that had no symptoms, according to a study in the CDC’s Morbidity and Mortality Weekly Report.

With just one dose, the vaccines were about 80% protective, the report said.

The study looked at how the vaccines protected nearly 4,000 health care workers and first responders. The volunteers in the study worked in eight locations around the country and had been observed from mid-December to mid-March.

The CDC tested volunteers routinely, regardless of symptoms.

“Reducing the risk for transmissible infection, which can occur among persons with asymptomatic infection or among persons several days before symptoms onset, is especially important among health care personnel, first responders, and other essential and frontline workers given their potential to transmit the virus through frequent close contact with patients and the public,” the report said.