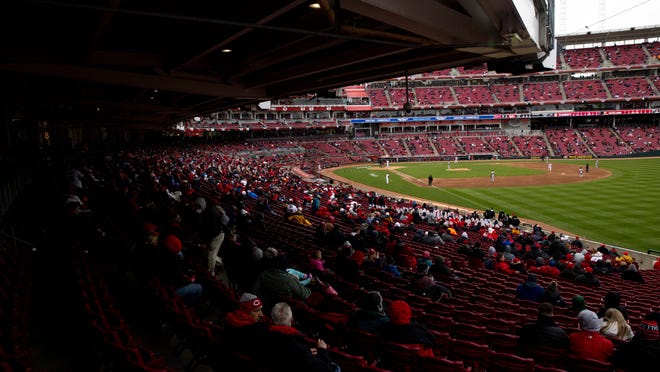 The vaccine favoritism questions swirling around Florida Gov. Ron DeSantis received another national spotlight Sunday when the CBS news show “60 Minutes” reported how the governor’s campaign donors were involved in the vaccine rollout.

The controversy intensified as vaccinations continue to gain momentum: Florida is one of 12 states that opened vaccine eligibility to all adults today.

The Florida report touched on a controversial vaccine pop-up clinic in Lakewood Ranch that drew a federal complaint, which was first reported by the USA TODAY Network; the state’s arrangement with Publix to distribute vaccine, and the disparity in vaccine distribution in Palm Beach County .

Vaccine favoritism questions have dogged the governor since the early days of the rollout, starting with the state’s January partnership with Publix, which donated $100,000 to the governor’s political committee in December.

“That’s a fake narrative,” DeSantis said in dismissing the claims. “I met with all the folks in Palm Beach County and I said here’s some of the options: We can do more drive through sites, we can give more to hospitals, we can do the Publix. And they said we think that (Publix) would be the easiest thing for our residents.”

Also in the news:

►Retail stores across most of Greece were allowed to reopen Monday despite an ongoing surge in COVID-19 infections, as the country battled to emerge from deep recession.

►The Nationals and Atlanta Braves are still waiting to find out whether Major League Baseball will allow their upcoming series to proceed as scheduled, while Washington deals with a coronavirus outbreak that could prevent 11 players from participating.

►After going more than a month with a handful of players at a maximum out in accordance with the NHL’s COVID-19 protocol, the league is now facing a new challenge: the growing number of Vancouver Canucks players being put on the list.

►Hundreds of Special Olympics athletes with intellectual disabilities received their first dose of the coronavirus vaccine Saturday at a facility in Hawaii.

📈 Today’s numbers: The US has more than 30.7 million confirmed coronavirus cases and 555,000 deaths, according to Johns Hopkins University data. The global totals: More than 131 million cases and 2.85 million deaths. At least 204 million vaccine doses have been distributed in the US and 165 million have been administered, according to the CDC.

📘 What we’re reading: The pandemic forced us to stop hugging, shaking hands. That’s not necessarily a bad thing, some experts say.

USA TODAY is tracking COVID-19 news. Keep refreshing this page for the latest updates. Want more? Sign up for our Coronavirus Watch newsletter for updates to your inbox and join our Facebook group.

March numbers much improved from January

The United States reported 37,925 COVID-19 deaths and about 1.8 million new coronavirus cases in March, with numbers roughly a third of the pace of a disastrous January, a USA TODAY analysis of Johns Hopkins data shows. But the easing appears to be shortlived as numbers have begun to rise again. In Delaware, the last time people were testing positive for COVID-19 at a rate as high as they are now was Feb. 11. Michigan has the most COVID-19 cases per capita of any state in the country, and on Saturday reported the highest case total in the state since early December. In Florida, the actual tally of variants ravaging the state is likely two or three times higher than what’s reported, said the director of the state-run Palm Beach County health department.

Vaccinations on the rise; 40% of US adults have been jabbed

The US reported more than four million vaccine doses in a single day for the first time Saturday, according to data from the Centers for Disease Control and Prevention. Over 100 million Americans have had at least one dose of vaccine, about 40% of all adults. And 23% of US adults are now fully vaccinated.

Britain to offer 2 rapid tests per week to all

Everyone in the United Kingdom will be able to take free rapid coronavirus tests twice a week starting April 9, Health Secretary Matt Hancock announced Monday. The testing option comes as Britain prepares to allow non-essential shops to reopen and pubs and restaurants to start serving outdoors effective April 12. The country is also preparing a system for allowing international travel to resume.

“Reclaiming our lost freedoms & getting back to normal hinges on us all getting tested regularly,” Hancock tweeted.

Vaccine passports being developed to verify COVID-19 immunization status and allow inoculated people to more freely travel, shop and dine have become the latest flash point in America’s perpetual political wars, with Republicans portraying them as a heavy-handed intrusion into personal freedom and private health choices.

They currently exist in only one state – a limited government partnership in New York with a private company – but that hasn’t stopped some lawmakers in a handful of states from rushing out legislative proposals to ban their use.

Vaccine passports are typically an app with a code that verifies whether someone has been vaccinated or recently tested negative for COVID-19. They are in use in Israel and under development in parts of Europe, seen as a way to safely help rebuild the pandemic- devastated travel industry.

Pope Francis gave his Easter message at Mass inside St. Peter’s Basilica before a gathering of about 200, rather than the traditional speech on the balcony overlooking a square packed with thousands. But the speech was streamed across multiple platforms, and at one point, 9,000 people were watching on Vatican News’ English-language Facebook page alone, Vatican News reported.

The pandemic was front and center in the pope’s address as Francis denounced armed conflicts in Africa, the Mideast, Latin America, Asia and Eastern Europe amid the global health crisis and pleaded for equity of care.

“The pandemic is still spreading, while the social and economic crisis remains severe, especially for the poor. Nevertheless – and this is scandalous – armed conflicts have not ended, and military arsenals are being strengthened,” Francis said. “That is today’s scandal .”

US vaccine rollout envied in Canada

More than 30% of Americans have received at least one vaccine dose compared to about 12% of Canadians, according to public health statistics from both nations.

“The good news for Americans has prompted a slew of jealousy, and criticism from Canadians asking why our provinces are so far behind,” the Toronto Star writes.

Conservative Canadian parliament member Michelle Rempel Garner took note on Twitter of the US push to open up vaccination appointments to all adults. She also noted that the Oakland Zoo plans on vaccinating some of its most at-risk animals this summer.

Social media users were quick to point out that on one recent day the US administered about 4 millions shots while Canada performed about 72,000 jabs.