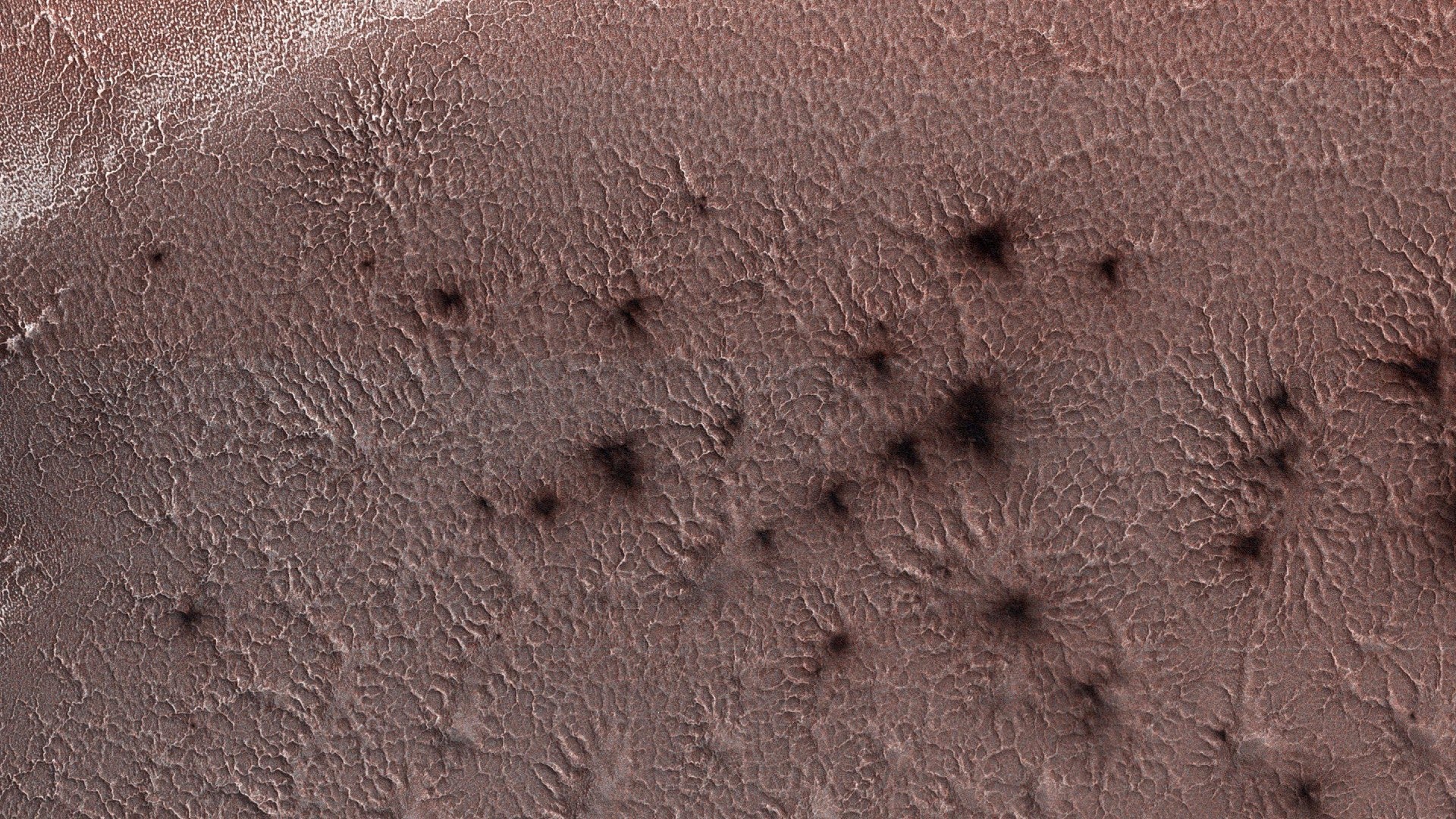 First discovered more than 20 years ago, “Mars spiders” are not freaky eight-legged aliens. Instead, the term refers to dramatic fractal contours carved into the surface of the red planet, with dark valleys radiating out like arachnid limbs. Now, scientists have demonstrated on Earth what may actually cause these unique martian features: the sublimation (or direct transformation from solid to gaseous states) of carbon dioxide-rich ice at the south pole.

In a new paper published in Scientific Reports, scientists in Ireland and the UK recreated miniature versions of Mars spiders in a Mars Simulation Chamber that recreates the planet’s atmospheric conditions. The team drilled holes into solid carbon dioxide—ie, dry ice—to simulate the natural vent structures in Mars’s polar ice caps . Then they placed the dry ice over sediment that simulated martian terrain. When the solid ice touched the sediment, parts of it began to immediately turn to gas.

When scientists later examined these blocks of dry ice, they found those same spidery, spindly cracks had formed where escaping carbon dioxide had tunneled through the ice.

“It is exciting because we are beginning to understand more about how the surface of Mars is changing seasonally today,” said planetary scientist and lead author Lauren McKeown in a statement.

At the dawn of the new century, shortly after the spiders were first observed, planetary scientist Hugh Kieffer posited that these dark Mars spiders were gas channels pushing their way through ice, visible as shadows because of just how transparent that ice was. In the “ legs” of the spiders, Kieffer added, were probably streams of carbon dioxide heated straight to gas form after being warmed by the martian springtime sun.

[Related: Was there ever life on Mars? Perseverance’s SHERLOC laser sniffs for microscopic clues]

The spiders show up consistently near the red planet’s south pole during the spring, in an area called the “Cryptic Terrain.” “Kieffer’s hypothesis has been well-accepted for over a decade, but until now, it has been framed in a purely theoretical context,” McKeown added in her statement.

At the moment there’s no way to say that this is definitely what is happening at the martian ice caps, but this experiment is the first to demonstrate that Kieffer’s theory can in fact yield these spider-like formations. And that’s a big step towards understanding how weather and climate impact the red planet’s landscape.