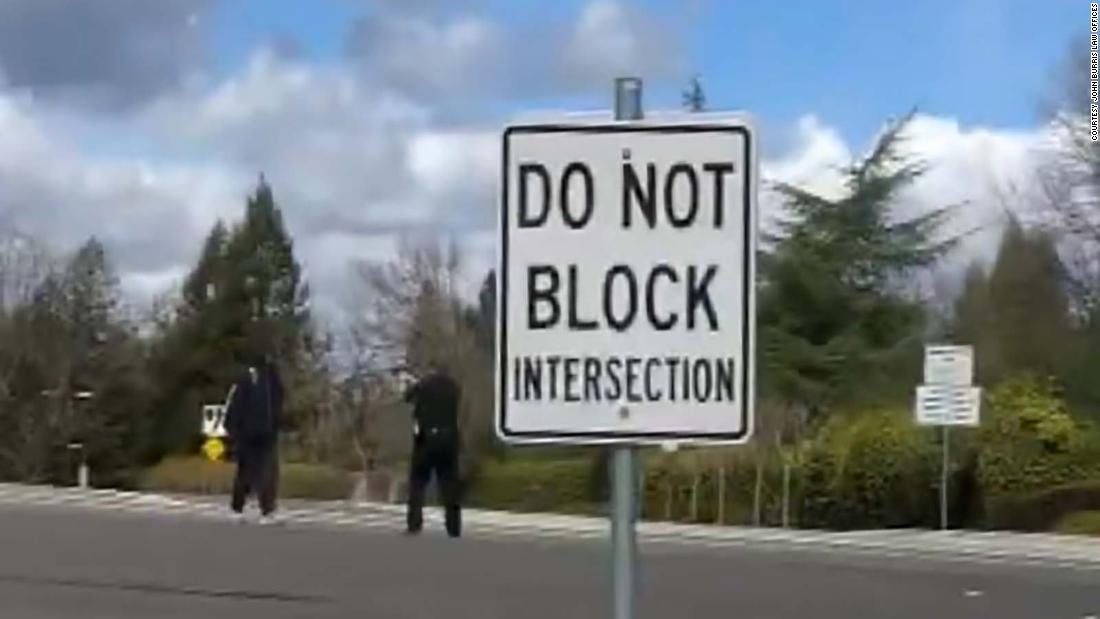 A video released Tuesday by family attorney shows the last seconds of the encounter between Tyrell Wilson and a Danville, California, police officer on March 11.

Wilson was carrying a grocery bag, walking by himself across a street toward his homeless encampment, according to a statement from his family’s attorney John Burris.

According to the Danville Police Department, Officer Andrew Hall was responding to calls police dispatch received of rocks being thrown from an overpass onto Highway 680. When Hall arrived at the scene, he approached Wilson and tried to talk to him but “the subject pulled out a folding knife and then opened it,” police said.

Hall ordered Wilson to drop the knife several times, but Wilson “advanced toward the officer, who discharged his weapon striking the subject once,” the police department said.

The police department also shared photos of Wilson holding a knife in his hand along with the release. Video of the entire encounter has not been released.

It’s unclear from the video whether Wilson was holding a knife or advanced toward the officer.

Addressing the video in the complaint, Burris notes “even if (the knife) was still in Mr. Wilson’s possession at the time of the shooting, the video shows clearly that Mr. Wilson took no aggressive action whatsoever in that time frame.”

In a news release, Burris also said there was no evidence, “Wilson was involved with the rock-throwing” and added that Wilson, who was “well known amongst daily commuters who all knew him as likable and easy-going.” The press release also notes that Wilson was homeless and had been diagnosed as a paranoid schizophrenic.

In a news conference Tuesday, Burris said they “did not see the knife in the video and the witnesses did not see that.”

“My son has never, ever been violent,” Wilson’s mother Diana said. “I have not seen the video, I do not want to see the video. I want my last thoughts and pictures of my son to be the beautiful man he is .”

“I do want the officer to come to some kind of justice because I don’t want another parent or father to go through what we’re going through now,” she added. “I think about my child, it makes me cry. “

Lee Housekeeper, a spokesperson for Burris, told CNN that the attorney’s office was in the process of filing the lawsuit last month when it found multiple eyewitnesses to the shooting who offered new information, including the video.

“The video and witness accounts show this was a cold murder,” Burris said in a statement. “Wilson never had a chance.”

In an email statement to CNN, Hall’s attorney Mike Rains called the lawsuit a “tawdry piece of legal fiction.”

Rains said he believes the Contra Costa County District Attorney “will no doubt carefully weigh the facts of this case, including video evidence Mr. Burris has not seen, and existing law, which authorizes peace officers to use lethal force when a suspect poses an imminent threat of death or serious bodily injury, and find no basis to charge a crime.”

Scott Alonso, public information officer for the Contra Costa County District Attorney’s office, said investigators are reviewing the incident and will later decide on whether criminal charges are warranted. That decision hasn’t been made yet, Alonso added. He explained that the district attorney’s office reviews any in-custody or use-of-force death.

Alonso was not able to comment if they have been given the new video as evidence in the case.

Hall has been a police officer for more than seven years, according to a press release from the Contra Costa County Sheriff’s Office. He is currently on paid administrative leave per department policy, according to the release.

The complaint, filed Monday in the US District Court for California’s Northern District, alleges no law enforcement officers tended to Wilson’s injuries. Wilson was transported to a local hospital after the shooting and died six days later on March 17, the complaint adds.

“This man is a menace, he has been a menace,” Burris said, referring to the officer.

Shawn Welch, president of the Contra Costa County Deputy Sheriffs Association, said “there’s been no actions taken by the department regarding discipline or anything because the investigation has not been completed.”

The internal affairs investigation, to determine if the officer followed policy, would follow the district attorney’s review, according to Welch.

“It’s pretty much dependent right now on what the DA’s office is doing with it,” Welch said.

The Danville Police Department and the Contra Costa County Sheriff’s Office did not immediately respond to CNN’s requests for comment.

CNN’s Peter Nickeas and Emma Tucker contributed to this report.

The young African women who fix stereotypes by repairing cars

Frontline Doctor: FBI’broke down my door’ in swat team raid of 20 men