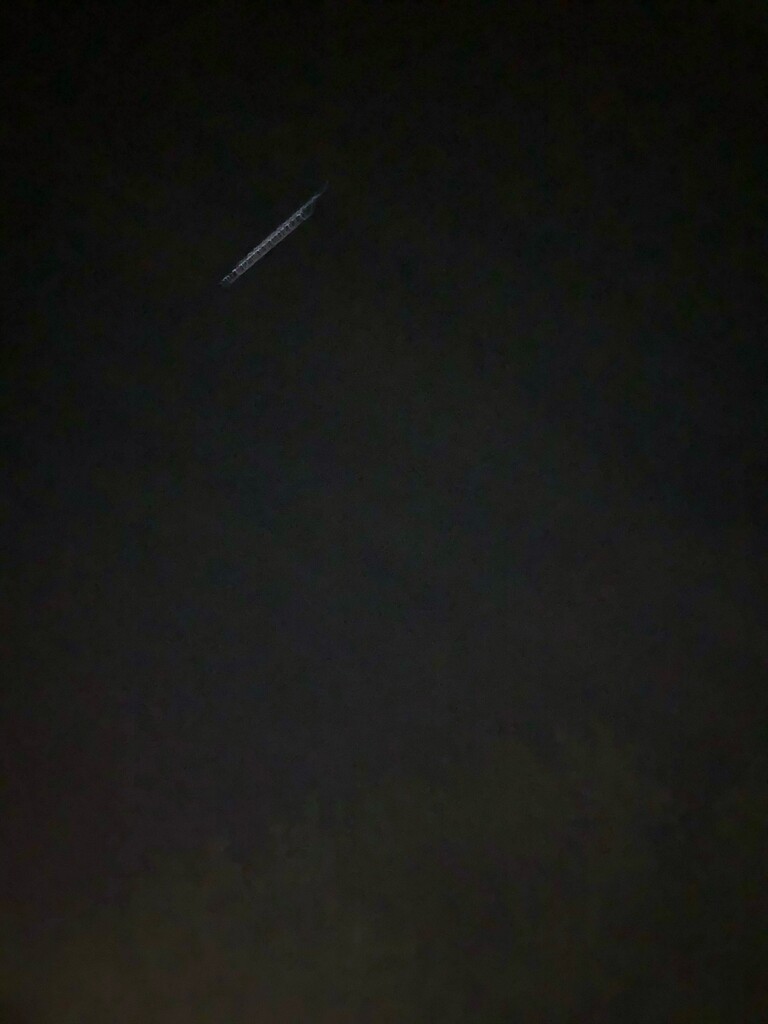 I walked outside tonight around 9pm and did my usual glance at the clear night stars. There was a string or line of lights traveling from NW to SE at a slightly faster pace than I’d expect to see satellites move through the horizon. My first thought was this is a group of starlink satellites. I grabbed my phone to take some pics then quickly called my son to try and get him outside before they passed, which didn’t work out btw.

Once they’d passed I started to digest a little of what I thought it was. First thought was Starlink. The string seemed to be very high altitude. It looked like a pearl necklace moving through the sky with about 20 separate points of illumination that ranged mostly in various shades of blue and purple hues. If you stretch your arm out towards the sky the length it would cover would be between your stretched out thumb and index finger. The more I thought about it, 20 satellites in that tight of a grouping seemed weird and a bit dense. I’ve seen them before and they tend to have a bit more separation.

Next I thought maybe this was a high altitude surveillance plane flying extremely fast, whether that plane be domestic or a foreign intelligence asset. The problem I had with that was it didn’t look that way to the naked eye. There were numerous points of illumination, all in a line, evenly and consistently streaking through the sky.

Don’t think it was a meteorite, I’ve seen many, including “fire balls” that light up the sky with various illuminous points burning up in our atmosphere. It didn’t do that, just a consistent illumination through ~70% of the night sky’s horizon. Didn’t get the impression that it was ET in nature but i guess I can’t really rule that out.

I’ve seen a lot of weird stuff but tend to come to logical, “most likely”, conclusions. This was by far the weirdest thing I’ve seen. Curious if anyone else caught a glimpse of this tonight and your thoughts on what you think it may have been.

The picture below is horrible, however what the naked eye saw was very different from what the camera captured. The picture makes me think high altitude pulse jet recon plane but my eyes say this was something else, possibly in orbit, with illumination caused from reflecting the sun.

My best guess is still Starlink but the picture doesn’t seem to look like that at all.