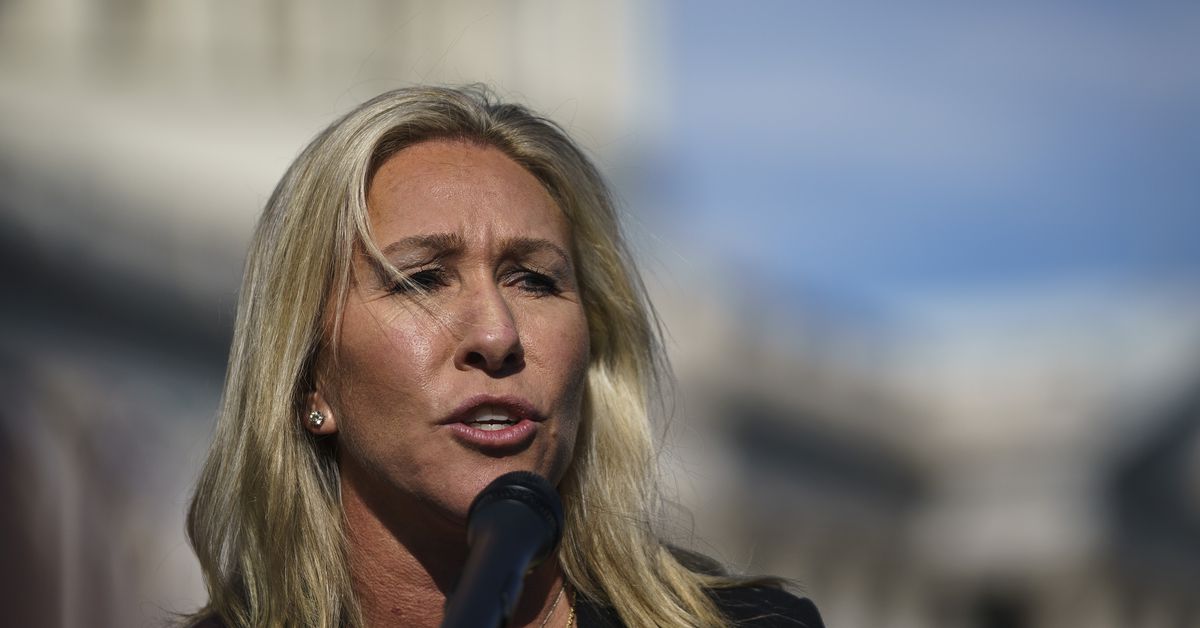 In preparation for what is likely to be a contentious reelection fight, freshman Rep. Marjorie Taylor Greene (R-GA) has raised more than $3 million in the last three months, Politico reported Wednesday.

It’s a shocking total, one that dwarfs the nearly $728,000 Rep. Alexandria Ocasio Cortez (D-NY) pulled in during the first three months of 2019, and it follows months of controversy that have dogged Greene since her election victory in November.

“I’m just getting started,” Greene tweeted Wednesday while celebrating the haul. “I am one of the people and the people are with me, and I will always be with them.”

Greene rose to political prominence in part because of her positive statements about QAnon, a far-right conspiracy theory that claims House Majority Leader Nancy Pelosi and other top Democrats are secretly running a cannibalistic sex-trafficking ring — and that former President Donald Trump has or had a secret plan to stop them. Greene has since distanced herself from those comments.

After Greene was sworn in, House Democrats introduced a resolution to censure her for previously calling the shooting at Marjory Stoneman Douglas High School a “false flag” operation and for suggesting that the California wildfires in 2018 were the work of Jewish-controlled space lasers.

Those incidents, among others, got Greene stripped of her two committee assignments in early February, including a coveted spot on the House Committee of Education and Labor. A group of 11 Republicans joined all 219 Democrats in the House to remove her, suggesting that while there was some disapproval of Greene among GOP lawmakers, the party was willing to coalesce behind her in light of her Trumpian rhetoric, bluster, and growing national popularity among conservatives.

A few weeks later, the Georgia representative again made headlines for posting a transphobic sign outside her congressional office. Greene’s critics argued it was a targeted attack, given that the lawmaker’s office neighbor is Rep Marie Newman (D-IL), whose daughter is transgender .

The very actions that got Greene kicked off her committee assignments and drew the ire of House Democrats helped boost her national name recognition — and led to a great deal of coverage in conservative media. Greene’s popularity among Republicans went up 11 percentage points in the days following the vote, with 30 percent of GOP voters viewing her favorably, according to a Politico/Morning Consult poll conducted from February 5 to 7. Her recognition among national voters increased by 14 percentage points. She’s aligned herself strongly with Trump, who remains popular in Republican circles.

Ultimately, Green’s big fundraising haul is a reminder that gaining notoriety on conservative media — rather than making efforts to pass meaningful legislation — is what holds real value in the modern Republican Party.

Greene — and other Republicans — are preparing for the 2022 midterm elections

Becoming the center of highly polarized controversy, and thereby the focus of fundraising, is nothing new in the modern era of politics. Greene follows the model of Sen. Ted Cruz, Rep. Michelle Bachmann, Sen. Josh Hawley, and Sarah Palin, all conservative media superstars who generated glowing coverage on the right and hate on the left. But as social media has become more crucial to fundraising, ginning up controversies is more than just a way to raise your profile — it’s also become essential to success in politics.

Given her popularity and apparent fundraising acumen, Greene’s future in Congress is all but assured — if she can survive what will probably be a difficult primary battle in 2022. She represents Georgia’s 14th District, a GOP stronghold tucked away in the northwest part of the state . Republican Tom Graves took home 76.5 percent of the vote in 2018’s general election; two years later, Greene won a cool 74.7 percent of the vote against Democrat Kevin Van Ausdal in a bid to replace the retiring Graves, even as Democrats wrestled control in all three flagship statewide races.

Greene may face at least one Republican primary challenger who favors traditional conservatism over the Trump-like brand of politics Greene has embraced. David Boyle, chair of the Walker County Democratic Party in Georgia, told Business Insider in late February that he expects the 2022 GOP primary to be a “bloodbath.”

“The middle-of-the-road traditional Republicans are tired of all of this craziness,” Boyle said. And anti-Trump Republicans in Congress, such as Illinois Rep. Adam Kinzinger, have begun laying the financial groundwork to support candidates who hew more closely to Reagan- or Bush-style Republicanism.

This looming challenge makes the more than $3 million now in Greene’s coffers all the more notable, as it will be of great help in fending off any candidates who might run against her in the primary. Also of note is that the lawmaker’s haul came primarily from small donors, over 100,000 of them in total. In recent months, many large corporations have expressed concern about political donations to GOP candidates in an effort to appeal to a more socially conscious body politic; according to Reuters, corporate donations have largely continued, but an inflamed base of supporters are ready to help offset any potential losses in fundraising.

The 45-plus corporate committees that cut off donations to Republicans following their efforts in January to overturn the results of the 2020 presidential election accounted for about $5 million in campaign giving in the 2020 election cycle, just 1 percent of the total money raised in the previous year. The National Republican Congressional Committee — which gives support to House candidates — raised $7.5 million in January 2021 alone. Much of that money came from House Minority Leader Kevin McCarthy, who has already distributed close to $11 million in funds for 2022 races.

Overall, Republicans appear to be building a strong reserve of campaign funds as 2022 races loom. The GOP sees those races as an opportunity to take back control of Congress, where they’re currently in the minority. The party not aligned with the sitting president has historically seen congressional gains in midterm elections, and at the moment, Democrats have only a six-seat majority in the House and a one-vote majority (via Vice President Kamala Harris’s tie-breaking vote) in the Senate.

“WE are just getting started! In the words of my favorite President Trump,’the best is yet to come’,” Greene tweeted Wednesday.

When it comes to fundraising, it appears she might be right.

Get Your Vaccine For Freedom-#26 by mklp316-Conspiracy

NYC’s Naked Cowboy out of Florida jail, back at Daytona Bike Week